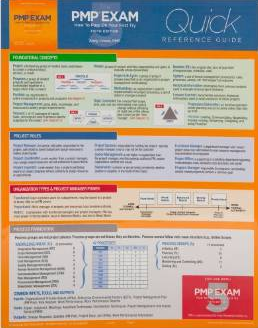 The PMP® guide can be used as wall posters to help PMP® aspirants to remember key facts for PMP® Exam including the 47 processes, the key ITTOs (inputs, tools, and outputs), PMP® formulas, etc. The Quick Reference Guide helps PMP® aspirants a lot by condensing the most important areas of the PMBOK® Guide Guide and the PMP® Exam into 6 pages of vividly illustrated exam guide. It can also serve as a last minute revision notes. The facts are presented as tables and graphs to help PMP® aspirants to utilize the right brain in addition to the left brain to retain the key information for the PMP® Exam.

The PMP® Exam: Quick Reference Guide, Fifth Edition (Test Prep series) is available in a pamphlet format measuring 8.5 x 0.2 x 11 inches. There are 6 laminated pages included in this PMP® reference guide. Each page is printed on a sturdy card which is laminated to ensure durability.

Reviews of this PMP® Guide are a bit mixed. Some PMP® aspirants praised the PMP® Guide highly as a must-have tool for PMP® Exam. They used it alongside with other PMP® Exam reference books as a complete toolset to help them pass the PMP® Exam in first try. They considered the section on the PMP® calculation formulas especially handy as the PMP® Guide does not include a summary of all the PMP® formulas on a page (as PMP® calculation type questions are considered one of the most “dreaded” or difficult parts of the PMP® Exam. Some would even keep the Guide as a day-to-day reference for their role as a project manager.

However, some considered the PMP® Quick Reference Guide as too simplified which did not include a lot of important facts and information they felt necessary for the preparation of the PMP® Exam. They would need to add additional notes or even wrote their own notes to help them prepare for the PMP® Exam.

About the Author of the PMP® Book

Andy Crowe is a seasoned project manager and an experience project management certification trainer. He is also a prolific writer of project management titles including The PMP® Exam: How to Pass on Your First Try, the Alpha Project Manager and more. The former PMP® title is considered one of the most useful PMP® Exam prep book to help PMP® aspirants to pass the PMP® Exam in first try. Andy does not stop at that, he continues to develop PMP® Exam prep courses as well as other PMP® Exam reference materials (including this quick reference guide) in order to help PMP® aspirants better.

Preview of the PMP® Book

The PMP® Exam: Quick Reference Guide, Fifth Edition (Test Prep series) can be purchased at Amazon (The links to Amazon are affiliate links, meaning that your purchase through this link will allow me to earn a little money to keep this website running, thank you!) by following the link below. Or you can take a closer look at the PMP® quick reference guide there.

PMP Book: How to get every Earned Value question right on the PMP Exam

Do I Need to Read Through PMBOK Guide? How Many Times?

Do I Need to Memorize PMP ITTO?